Toppings
According to taste you can, fried onions, chives, shredded,
roasted ebi

How to make healthy snack talam

What are talam made of?

Tray cakes are usually made of sweet potatoes or yams. This time, you can use red sweet potato to make a talam cake. Talam cake is considered a practical cake, because once made it can be used for large portions

How does the talam cake taste?

Talam cake has a sweet and savory taste. The savory taste of talam cake comes from coconut milk which is one of the main ingredients. In the month of fasting, talam cake is one of the menus for breaking the fast. This traditional cake is included in the category of wet cake, so it will not last long when served.

Where did the talam cake come from?

Why the name Cake Talam?

In ancient times, this cake did not have as many variants as it does today. It is called ‘Kue Talam’ because this cake batter is molded on a round pan or ‘Talam’. There are also those who call ‘Talam’ which means tray or tray. 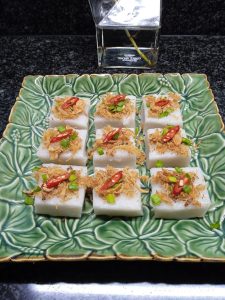 This Betawi specialty cake has several. Types this cake batter is molded on a round pan or 'Talam'. healthy snack recipes talam

CARAMEL PUDDING Don't Be Curious -This pudding with caramel aroma is one of the family's favorite dishes, especially when...
Food

Cook my husband's mother-in-law's favorite food I bought half a kilo of chicken heads and a kilo...
Food

It was grilled fish that had not finished for days.Yes, we have reworked it so it doesn't go...

CARAMEL PUDDING Don't Be Curious -This pudding with caramel aroma...

Just found out about this culinary after moving to...

Ingredients for Shrimp 300g prawns, peeled leaving the tail and...

© 2022 priambododimas. All Rights Reserved. Made with Love